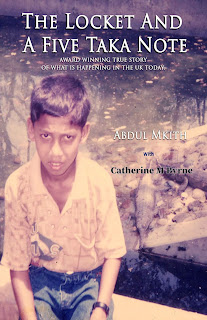 Abdul Mkith's early years are told in the harrowing true story A Locket and a Five Taka Note.


It begins with his early life in Bangladesh, and how, after relentless persecution, his family sent him to the UK to a place of safety -- or so they thought. There then follows a catalogue of abuse and unbelievable cruelty, highlighting what is going on under our very noses. It's not just to children brought from foreign lands. Abdul meets with a young English girl in what he describes as the Hell House. He also sees many more white teenagers going and coming.

Once he became a teenager, he was forced into delivering drugs. The one time he rebelled, his finger was cut off with a bolt cutter.

This is not a doom and gloom story, however. Abdul was one of the lucky ones who was rescued during a drugs raid. Eventually he was fostered by a loving family, and the book ends on a positive note.

The picture above is of Abdul just before he was sent to England.
https://www.amazon.co.uk/Locket-Five-Taka-Note-story-ebook/dp/B071RKSXZS 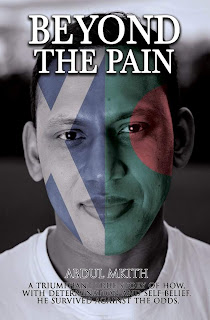 Of course childhood abuse does not leave anyone undamaged. Abdul's fight is far from over. Now, having spent so much time with a Scottish family, he feels part of the community, but half of him is still at home in Bangladesh. Subsequently his struggle is not just with the effects of his abusive past, but also with his identity, with racial abuse, as a child coming out of care, with his lack of education and finding his place in the world.

Through his self-made coping mechanisms, Abdul hopes to help others struggling with any of the above issues. Beyond the Pain is the story of how Abdul rises above adversity, where he is in the world today and how he copes with coming face to face with the man who initially tore his family apart.

This book should not just be read by his fans and those struggling with above issues, but by all professionals trusted with child care.

The above picture is Abdul, how he looks today.


Beyond the Pain will be available in shops and on Amazon from the 4th of April.
Posted by Catherine McCaughey-Byrne at 07:24